Metro Denver is bursting at the seams right now with high value programming from a variety of arts organizations that connect some of the best artists with the public in the form of exhibitions, education and community. From robots to queertooning- it’s hard to know where to focus attention.

Here are five things to put on your calendar:

1. Downtown Aurora Visual Arts, one of Aurora’s gems and staples right off of Colfax and Florence was bursting at the seams this summer.

Free Public Hours: Monday to Friday 10 am to 5 pm, or by appointment. 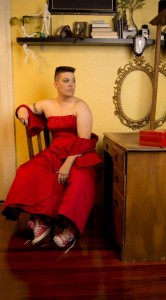 2. While one of the collaborative works by Richard Alden Peterson and in the Colorado Photographic Arts Center exhibit, “Fashion/Culture” on the second floor of the McNichols Civic Center Building has been censored the works that remain are definitely worth the trip.

Go to the CPAC website to get tickets for the “Gala Fashion Show, “ prices variable. 3. Sure to be a new creative powerhouse in RiNo, in late October Platteforum Creative Residency moves over to the first floor of The Temple on 2400 Curtis Street (kitty corner from Redline and Wonderbound) right as the next artist, Folawole arrives in residence on October 13.

Built in the late 19th century as the first major Jewish synagogue The Temple is now being transformed into three stories of individual artists studios (including Chinn Wang, Mario Zoots and Dylan Scholinski) as well as community resources Sentimental Studios (facilitates creative alternatives to suicide), Denver Zine Library and Processus (a a multi-use shop, a darkroom, a clean space and a coffee shop/pop up space).

Surrounded by all these resources this move is a gamechanger for PlatteForum and is sure to have an immense impact on the artists in residence and students. Folawole, “a Nigerian and American solo performer and artistic director currently based in San Francisco,” will bring guest artists Antonella Fittipaldi, Maratea, Italy and Rebecca Walden, South Carolina to inaugurate the new space. While earlier work includes improvisational components such as in Pictures of Joy,2010 at the Museum of African Diaspora he also works with sets and choreography as in Making Visible of “Verse us”at the Marina Abromovic Institute. As with past residencies the public will have multiple opportunities to engage as the work unfolds and interact with the artist during open hours. 4. Not to be outshone, there’s some hot stuff going on over at the Art Students League of Denver. Executive Director, Rachel Bayse scored past RMCAD Chair of Fine Arts, Rebecca Vaughan as the new Program Director.

Now you may take a class from Denver’s beloved abstract painter Homare Ikeda, simultaneously learn “How Sh*t Gets Made” with Martha Russo, and “tour the collection at the Denver Art Museum as it pertains to the history of thought and pictorial space” with the inimitable Bruce Price.

Sigh. If I was young again I’d take Melanie Gillman’s “Introduction to Comics and Sequential Art” that is “designed to get teens engaged in making art in a format that they are already steeped-in – graphic novels, and the storyboarding that goes with game art and animation.” Great class description for parents but the real story is that she’s a self-identified “queertoonist” who holds an MFA in comics from the Center for Cartoon Studies who is not afraid to say what needs to be said. Gillman’s newest webcomic “As the Crow Flies” that has been nominated for the Slate Cartoonist Studio Prize can be read online for free at http://melaniegillman.com.

There’s a lot going on. Sign up for the newsletters.

Classes fill fast. Check out the classes and get registered. Prices Variable.
Demo and Dialogue Series $5 or free to Members 5. Even though the Museo de las Americas wasn’t the first organization in Denver to hold a Dia de los Muertos Celebración they are probably the most authentic with a great blend of both “high” and “low” as well as syncretized customs and traditions.

In preparation and in conjunction with the exhibit, “El Brindis REMIXED,” attend a Spanish Happy Hour with an introduction to Pulque with Dan Beneavidez (owner of Boulder Imports) on October 17.

Similar to beer, Pulque is made from fermented agave juice and is attributed to Tepoztecatl, a Nahuatl (Aztec) god. A selection of photography from Manuel Alvarez Bravo, Graciela Iturbide, Agustin Victor Casasola, and Nacho Lopez rounds out this lighthearted commentary on “El Brindis REMIXED.” Toasting with pulque at Museo is sure to bring the traditional into new frames of reference. “Museo de las Americas educates our community about the diversity of Latino Americano art and culture from ancient to contemporary through innovative exhibitions and programs. With the Latino population growing exponentially in Denver and wider communities, Museo plays an important role in building pride in the Latino community’s heritage and promoting understanding among cultures. Other history and art museums in Denver cannot focus on one segment of the community in a sustained or comprehensive manner. Museo was created to fill this important niche in the cultural milieu.”